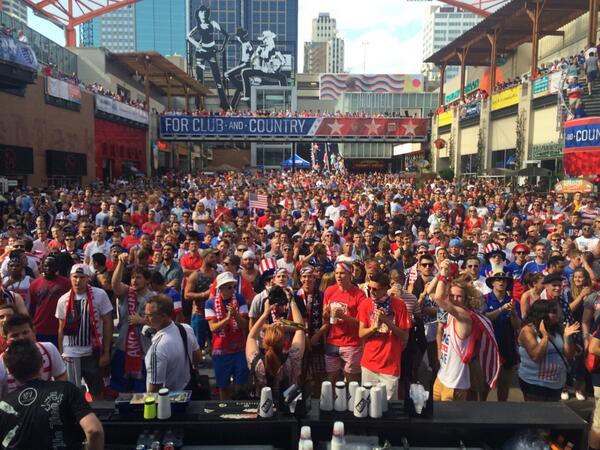 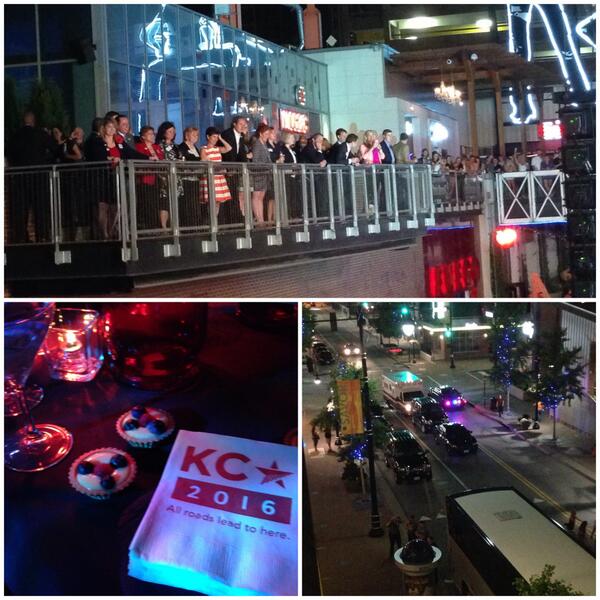 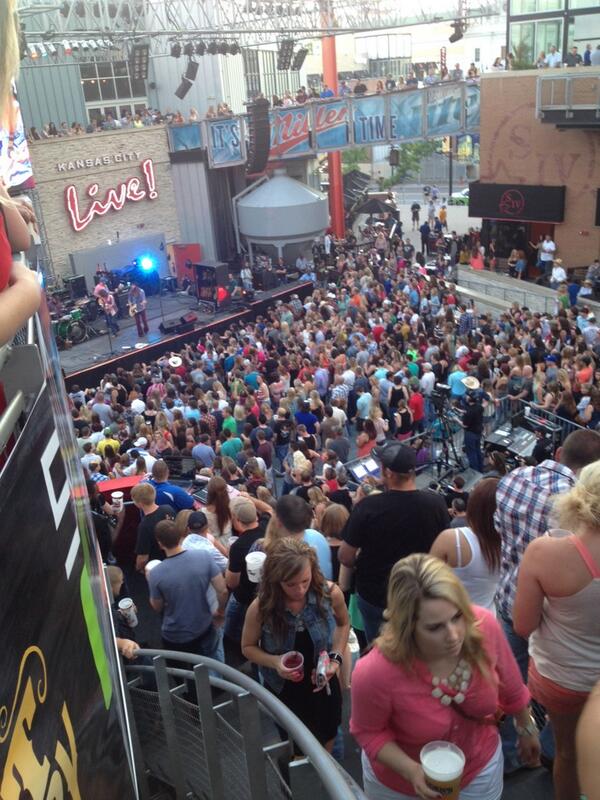 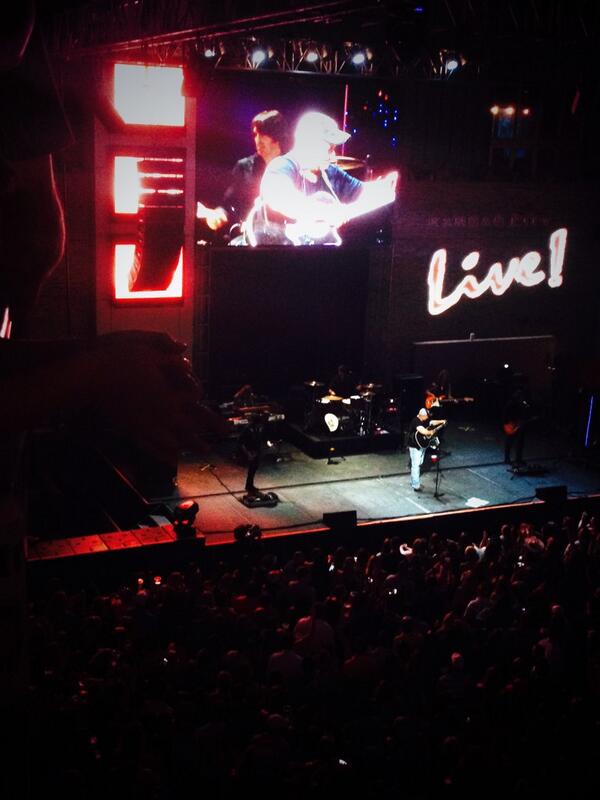 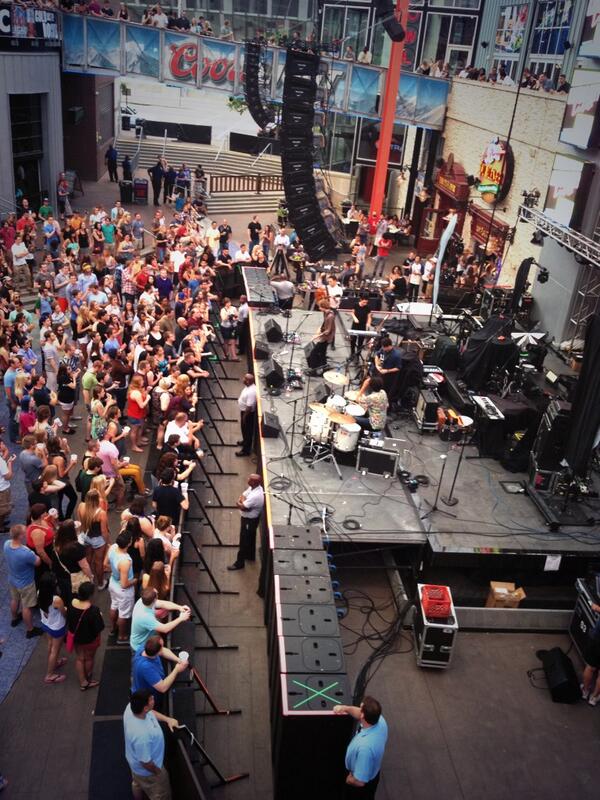 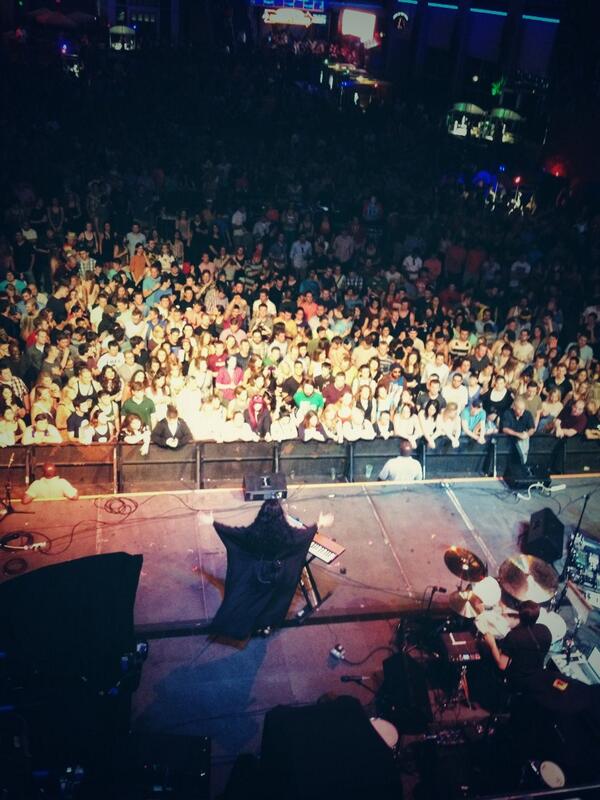 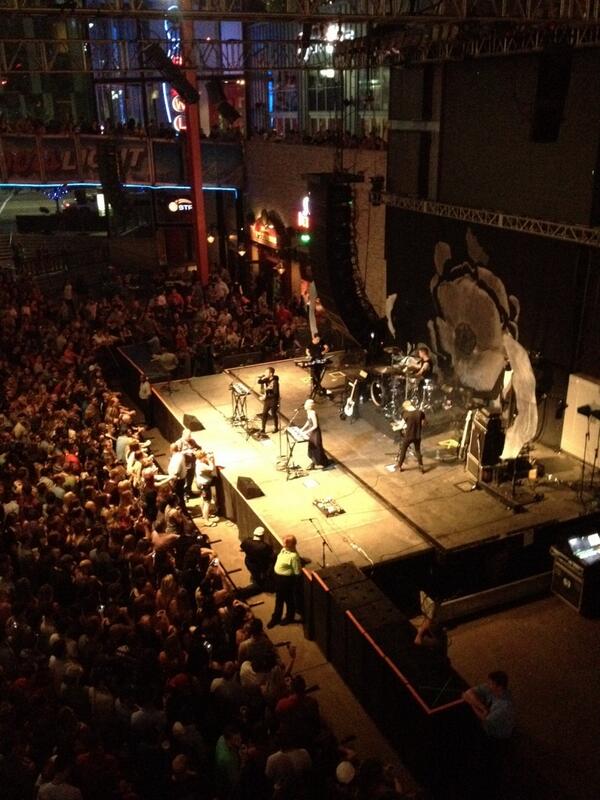 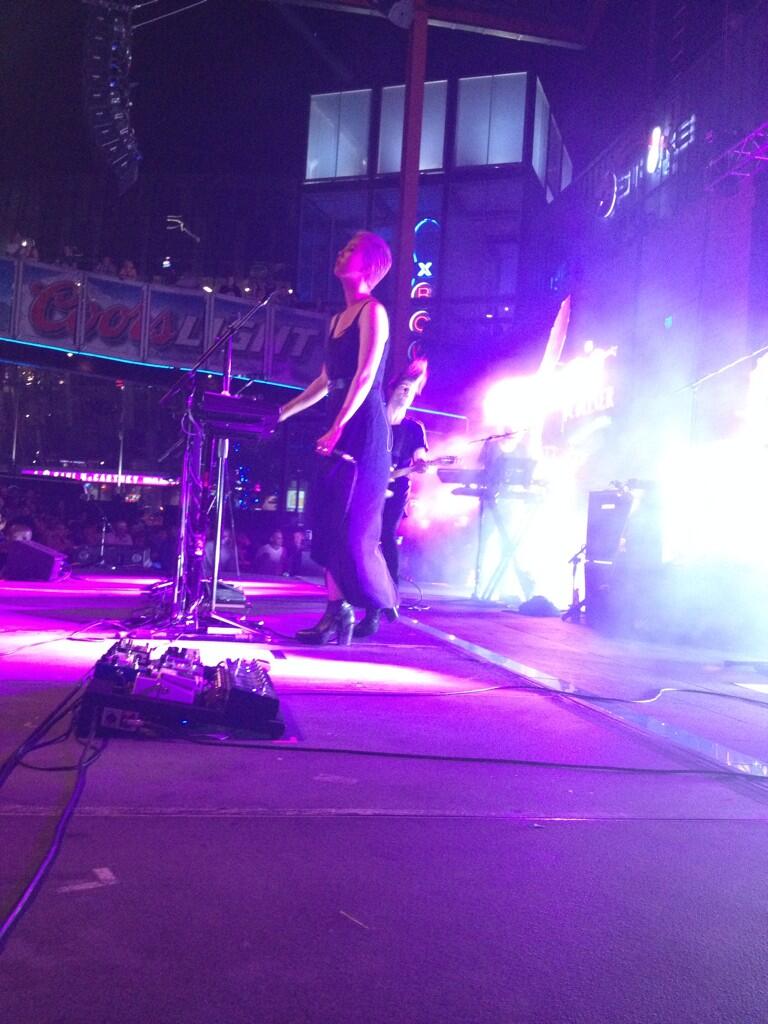 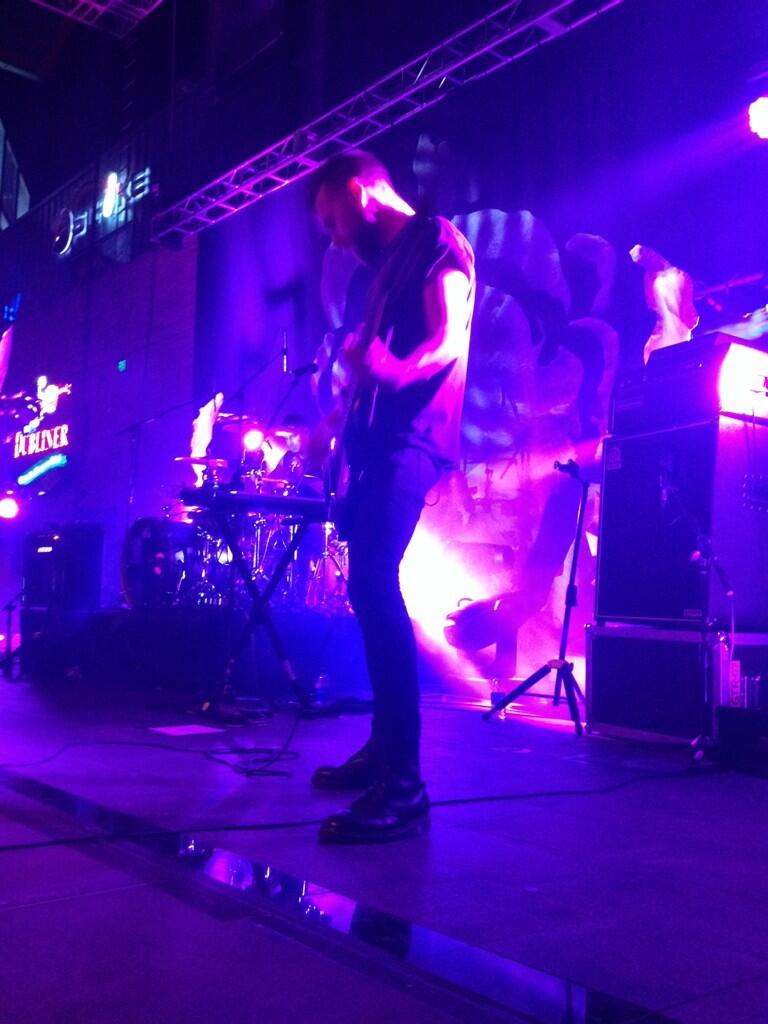 Well… we kicked off our 2014 Hot Country Night Concert with Eric Paslay last night. Drew Baldridge opened up the night with some fun cover songs and some of his own songs. The night was perfect. Not too warm not too cold. It rained for a short bit but it didn’t stop any of the fun. Once Mr. Paslay took the stage the night was perfect. He sang some of his hits such as “Song About A Girl“ and “Friday Night.”

The crowd couldn't resist an encore from @Ericpaslay! What a great way to start off #HCNKC! Stick around for a little more fun @kcpldistrict!

He said his goodbyes then decided it wasn’t enough. The crowd went wild when he came back for more KC love.

The Power & Light District invites you to help transform KC Live! into Bourbon Street on Saturday, March 1st for the annual Kansas City Mardi Gras Festival. Known for throwing the largest Mardi Gras celebration in the Kansas City area, the KC Live Block transforms into a New Orleans-themed street festival with popular street performers including fire jugglers, stilt walkers, unicyclists, fortune tellers, musicians, human statues, mimes and more – this is a party you won’t want to miss! The festival includes a variety of contests including crawfish eating, beignet eating and Most Beads – all with cash prizes. Plus, a Cajun food fair with yummy jambalaya, beneits and more. Did we mention it’s free?! Admission to the New Orleans-themed Kansas City Mardi Gras party is free from 8 to 11 p.m. You can also upgrade to an all-inclusive, 3 hour party from 8-11 p.m. The Mardi Gras Bar Crawl is only $25-35 (depending on your selection of well vs call beverages) and you get endless Captain Morgan Hurricanes, cocktails, beers and cover all night at 15 bars including the KC Live! Block – a deal fit for a king!

I’m not going to say that we had every genre of music on the Live! Block this past week, but we sure gave it a good run. As is tradition, Thursday night was dedicated to Country music and recording artist Greg Bates, you know the guy who sings “Did It For The Girl”. Despite mother nature’s drastic attempts to ruin our plans of getting careless on a Thursday night, we stuck it to her with a little thing called a roof. Those things sure work wonders in terms of keeping people dry, who’d a thought. Relatively new to the scene, he signed his recording contract in 2011, Bates managed to attract a decently diverse and may we add dedicated audience. As far as his sound is concerned, the 25 year old packs a deceivingly deep voice inside his smaller than average frame. No doubt about it though, the man can flat out sing; a thunderous performance enhanced by the aid of actual thunder. I have a hunch that we will be seeing big things from Bates in the near future, loads of potential and plenty of open road ahead of this young artist.

Now for Friday night, not sure that the written word can adequately describe what went down on the Live! block…. but I’m going to give it a shot anyway. Allow me to just preface the evening with this, 96.5 the Buzz knows what the hell they are doing and set the FREE concert bar just about as high as it could possibly be set. With headliner Grouplove (I’ll get to the raddness that was their performance shortly) and opening acts Robert Delong and Middle Class Rut, the audience was essentially treated to three headliners for the price of… well free.

For those of you who have never experienced a Robert Delong show, let me tell you, I do not use the word “show” lightly. Coming from an accomplished background in drumming, Delong weaves stellar set based percussion patterns into electronic, key/synth, and mixed loop audio tracks for what is truly a mind-blowing musical performance. As if we weren’t impressed enough by the sheer musical talent that seems to radiate from this young man, we were left scratching our heads at certain points as to what was actually going on. At certain points in his performance, Delong used xbox and wii controllers to do…. well honestly I’m not really sure what they were “technically” doing, but it was badass whatever it was so for now we can just go with, he was using video game controllers to make music. To think I have been using my controllers to get my ass kicked by 12 year old kids online. Thirty five minutes of constant jumping, dancing and… raving? Do people still say raving? Delong’s set was over and the crowd could finally dry themselves of their sweat. Kudos to Robert, what an opener… here you go Middle Class Rut, I just made them “fucking dance” they are ready for you now.. (that’s what I would have said if I were Delong)

Opening with electronic, crazy dance music? Let go ahead and do a 180 and put a hardcore Punk Rock band on stage next. Seems logical to everyone else right? Jumping around aimlessly and head-banging goes with just about any upbeat music anyhow. From the first kick of the bass drum and extremely loud symbol crash Middle Class Rut picked up where Delong left off. First up on the set list, “Busy Being Born” a spot on performance and if I didn’t know better I would ponder whether they were lip-sinking. These seasoned veterans sure know how to put on a show. Like any good punk rock show, the volume remained loud, screaming guitar solo’s blared out within what seemed like every song, and the drummer decided that a shirt was not necessary… can’t really blame the dude though, with a CAPACITY crowd the place was a tad bit on the warm side. Their job is to “warm up” the crowd though…

Now for Grouplove. It’s hard to even think about that performance without childishly grinning. Their sound, apart from just being awesome, was sort of an indie/rock/folk mashup that just rejuvenates the eardrums. Christian and Hannah (male and female vocalists) take the male/female vocal split style to their own level. Bouncing back and forth vocal lines their voices just mesh extremely well, the fact that Christian’s voice is of the higher pitch for male vocalists helps to compliment Hannah’s soothing tone. To fully understand though, you really have to listen to their singles or see them live.. quite frankly though, there really is no difference between their recorded tracks and their live tracks, they are just that good. Hit singles “Tongue Tied” and “Ways to Go” were saved for the end of the concert with “Tongue Tied” being used as the encore.. duh.. The crowd went nuts for both. If it wasn’t for bumping up the gain on the mics, we would have been served up the audiences rendition of the song instead of the artists. The group sing along was as beautiful as it was loud. If you missed this show, or didn’t get to the block in time to get in due to the fact that we were at capacity ( I enjoy gloating about that) get online, figure out when and where they are playing and plan a summer trip. Real talk, see them now.

If you saw the show, I hope you enjoyed it as much as I did. I think I am finally back to my normal hearing level now, and the only problem I have left is my anxiety that it really is over. Be sure to send over a few compliments to 96.5 The Buzz and Miller Lite, they did us all a favor with this epic freebie. #Listenlonger y’all and just maybe they will grace us with another.